What are the characteristics of lithium battery separators? 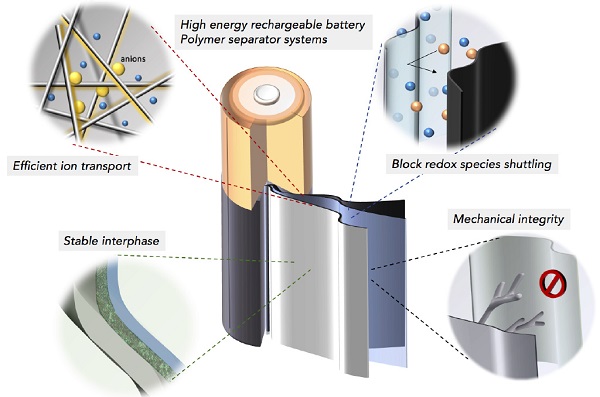 The lithium battery separator is located between the positive electrode and the negative electrode, and its main function is to separate the positive and negative active materials to prevent the two electrodes from short-circuiting due to contact; in addition, during the electrochemical reaction, it can maintain the necessary electrolyte and form a channel for ion movement. The diaphragm material is non-conductive, and the diaphragm used is different for different types of batteries. For lithium-ion batteries, since the electrolyte is an organic solvent system, the separator is required to have the following properties.

1. In the battery system, its chemical stability is better, and the materials used are resistant to organic solvents.

3. The ionic conductivity of the organic electrolyte is lower than that of the aqueous system. In order to reduce the resistance, the electrode area must be as large as possible, so the diaphragm must be very thin.

4. When the battery system is abnormal, the temperature rises. In order to prevent danger, when the rapid heat generation temperature (120 ~ 140 ° C) begins, the thermoplastic diaphragm melts, the micropores are closed, and it becomes an insulator to prevent the electrolyte from passing through, thereby achieve the purpose of interrupting the current.

5. From the perspective of lithium batteries, it must be fully impregnated with organic electrolyte, and can maintain a high degree of impregnation during repeated charge and discharge.

What is the weight of lithium-ion battery per kWh? October 21, 2019

Which type of battery for smartphone is better: Li-Ion or LiPo ? August 20, 2019

What is the relationship between voltage and capacity of 18650 li-ion battery? September 26, 2019
Latest

What are the precautions for electric bicycle lithium battery charging? November 29, 2022

What is the principle of fast charging of lithium batteries? November 21, 2022

What kind of battery do smartphones use? November 7, 2022